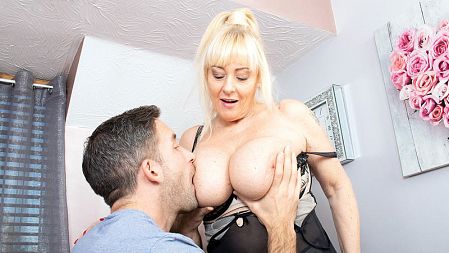 Alex, who's 34 years old, goes to Wendy Leigh's bordello looking for some 18-year-old pussy to fuck.

"When will the girl be joining me? The one I saw in the advert?" he asks.

"Oh, I'm here," says Wendy, who's obviously not 18. She's 58 years old! Is this the ol' whore house bait and switch...the one in which they rope you in with a photo of one girl and then give you another? Maybe, but if so, it's the best kind of bait and switch...it's bait and snatch!

"The girl I replied to was an 18-year-old and that's who I thought I was seeing today," Alex says.

How she dresses when she's out in public: "Very sexy! Short skirts, tight jeans, low-cut tops."

How often she has sex: "Every week."

What gets her off: "Oral sex."

What she wants to try that she hasn't: "Sex with a lady."

Sex with a much-younger man? "Lots of times."

And she loves being watched when she's fucking.