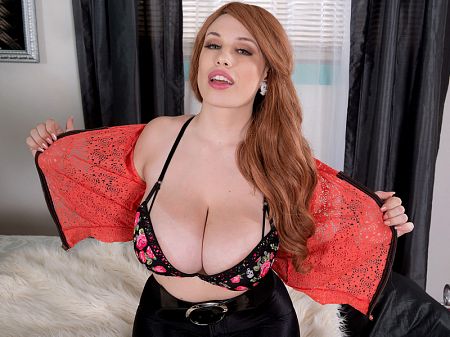 "Guys normally make comments. Sometimes they shout things in the street at me like, 'Oh, my god, big tits.' 'Look at the size of her.'"

So said Lily Madison. What can we say? We don't live in a world where girls shout at guys, "Look at that guy's package!" or "Look at the junk in his trunk." I wish they would.

Lily was born and raised in London. She contacted SCORE after guys on the web kept telling her to do it. Lily's tan-lined boobs measure 34G. She has very large areolae and measures them in this video. Their diameter came to 5", which is certainly very large, her ivory skin making them look even more prominent.

Lily was web-camming for two years before she and SCORE connected. This video was shot in Miami. Later on, Lily was filmed in the Caribbean and again in Prague.

Here, Lily crushes a soda can between her tits and jiggles her boobs while balancing a large book on her head, just like they do at the famed Boobizon School of Modeling. She's good with boob tricks. I believe we saved the can for posterity.

When she returned to Great Britain, Lily arranged to have a cake sent to our studio, a very nice and unexpected gesture. We published a photo of Noelle Easton and photographer Jose holding the cake in the March '14 SCORE magazine. 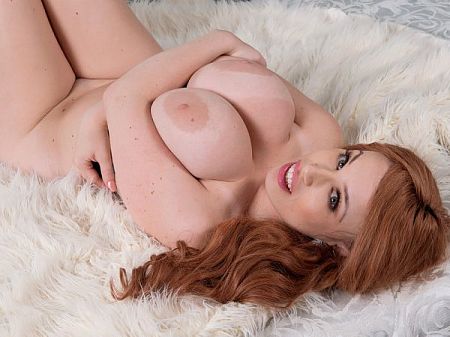